New York Fashion Week vs. Super Bowl
The Kick Off

Now in February, two major events return to their respective stomping grounds, and earn their rightful spot in the public eye: the ultra fab, exclusively elite New York Fashion Week, and the country's #1 passion Super Bowl 50. With two highly anticipated spectacles ready to 'break' the internet, we were wondering how much clout each one has on our society and culture. From economical impact to food and beverage consumption-- numbers never lie. We did some hardcore sleuthing, and rounded up 7 of the craziest facts about NYFW and the Super Bowl we bet you didn’t know before.

Clearly fashion is not just a pretty face.

Bringing in about double the revenue than the Super Bowl, NY fashion weeks (S/S and F/W) in total boasts a whopping $900 million, more than the US Open and NYC Marathon. According to Congresswoman Carolyn Maloney, the fashion industry as a whole employs over 180,000 people, which pays $11 billion in wages, and generates about $2 billion in tax revenue per year. Bet you didn’t think the fashion industry had those numbers up its sleeve. Might want to move out of the way NFL… cause the CFDA ain’t playing around.

Super Bowl is the most watched broadcast in US TV history. Period.

When it comes to faithful fans, the Super Bowl is unbeatable. Neilsen’s data tells us that Super Bowl 49 was the most watched broadcast in TV history, catching the attention of 114.4 million viewers! CNN Money suggests that Neilsen doesn’t account for groups at sports bars or viewing parties where more than the average ‘4 per household’ are watching the game, which could lead to an even higher reach. On the other hand, due to its exclusivity and invite-only tradition, New York Fashion Week across both seasons is typically attended by about 125,000 showgoers. Though with today’s technology and info-sharing capabilities, NYFW has been more accessible to a wider audience through livestream. Last year, over 2 million people tuned in from their couches and/or cubicles to get the inside look on the hottest trends and styles to hit the runway.

“Control your expenses better than your competition.”
(Sam Walton)

Did you know one little 30-sec commercial aired during the Super Bowl costs advertisers anywhere from $4.5 million to $5 million dollars?! That’s equivalent to about 25 Harry Winston 3-carat diamonds rings! But, with these 114.4 million viewers gauranteed to watch TV during your commercial, that $5 million doesn’t seem too hard to justify in terms of marketing ROI. Designers are also known to put down a pretty penny to make sure their shows captivate fashion’s elite. Achieving approval from industry influencers is afterall the most important meausure of ROI in the fashion game.

There’s no doubt that with popularity comes demand. In NYFW’s case, designers are the ones doing the ‘demanding’ to earn their publicity. On average, about 130 front row seats are available in a typical fashion show, and the people who are seated in those seats are just as important as the clothes coming down the runway. Bringing in renown editors, ‘It’ girls, top bloggers, and celebrities gaurantee an incredible amount of press. In fact, A-list celebs are paid up to $100,000 just to attend a show during fashion week.

On the other hand, the owners behind the Super Bowl are actually the ones in control of the supply. As influencers are offered a pretty large sum for their attendance during fashion week, celebrities that perform during half time are actually paid significantly less… a total of $0 dollars! Insane right?! (Yahoo! Sports) Talent like Beyonce, Katy Perry, Madonna and NSYNC were paid nothing to perform on the prestigous Super Bowl stage. What’s more: Katy Perry was actually asked to donate her own money to headline the halftime show! (she refused...as she should) Though it’s vital to realize the publicity value garnered from a performance at half time, which is equivalent to a 12-min commercial-- $120 million in monetary value!

To eat, or not to eat… that is the question.

It’s no surprise that America is known as the country with the largest… appetite. Well, it seems that the Super Bowl is the day where we feast the hardest. In a report issued by The National Chicken Council: on game day Americans eat an estimated 1.25 billion chicken wings! To put things into perspective, the council also calculated that if laid side by side 1.25 billion wings would circle the Grand Canyon 120 times. To wash down those chicken wings, Americans were also reported to consume about 325 million gallons of beer!

Not surprisingly, food and beverage consumption during NYFW is nowhere near the magnitude reported during the Super Bowl. With about 26,000 cups of espresso and 45,000 Fiber One bars consumed, those at NYFW aren’t really focused on food anyway. (School of Style)

Ah, social media-- the truest form of clout. Measured by anyone who has an opinion, social conversations are always loud and fierce for both spectacles and continue to hit new heights in engagements and interactions every year. In 2015, #nyfw was reportedly used 31.6 million times in Instagram engagements. And in 2015, #superbowl alone garnered a total of 28.4 million tweets!

It’s evident that both of these events have had some ground-breaking moments in media history.
We wonder what this year's numbers will look like! 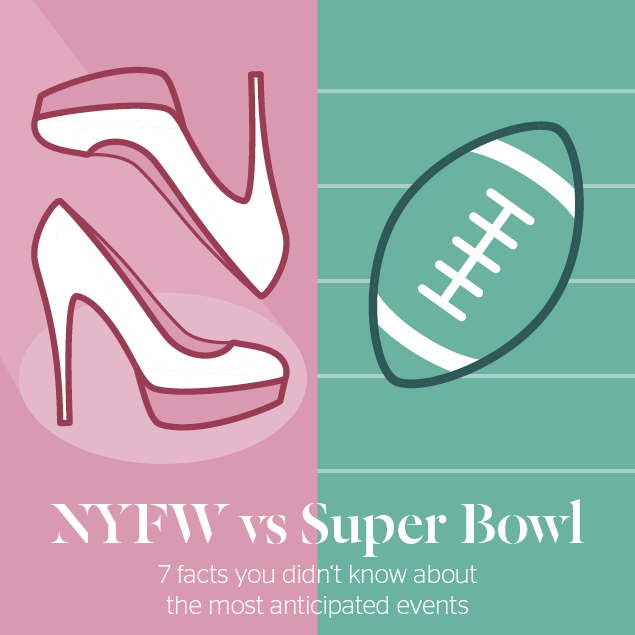